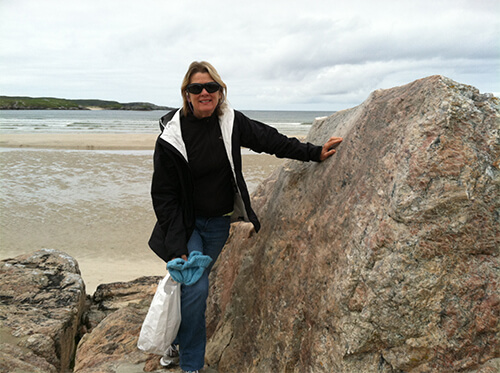 Paula Huston knew she was going to be a writer by the time she was in second grade. Yet like many writers, the way was long and convoluted. Instead of going to college, she married at 19 and had two children by the time she was 25. She worked at a series of clerical jobs and took courses when she could, but her focus was always on teaching herself how to write fiction, which she did by checking out years’ worth of Best American Short Stories and O’Henry Award collections and studying the techniques of the writers she liked best. She published her first short story before she turned 30 and continued to place stories in literary journals for over a decade before she published her first novel, Daughters of Song (Random House 1995). In the interim, she went through a divorce and several years as a single mother before remarrying and adding two step-daughters to her life.

At 35, she finally enrolled in full-time college coursework, completing her Bachelor of Arts Degree in English and going on to earn a Master’s Degree in English and American Literature. She was hired to teach writing and literature at the university where she received her degree. Meanwhile, she continued to write and publish literary fiction. A reconversion at 40 to the Christianity she’d abandoned as a teenager led her to the Catholic Church and eventually to becoming an oblate (lay member) of a community of contemplative Catholic monks. Curious to see if she could use the skills she’d learned as a short story writer and novelist to write about the spiritual life, she spent the next 20 years writing eight books ranging in subject matter from the sacraments to the spiritual disciplines to the virtues to understanding the mystery of the Mass. In 2013, she published her second novel, A Land Without Sin (Slant), which features a young atheist protagonist whose priest brother goes missing in Central America. Liturgical Press released her latest title, The Hermits of Big Sur, in 2021, which covers the history of New Camaldoli Hermitage from its inception in eleventh-century Italy to the founding of its American daughter house in 1958.

Nowadays, she and her husband Mike raise olives, fruit, vegetables, chickens, and bees on four acres on the central coast of California, where they have lived for the past thirty-seven years. She divides her days between their grandchildren, their little farm, the hermitage, and her own writing.